Who is Mad or Schizophrenic? 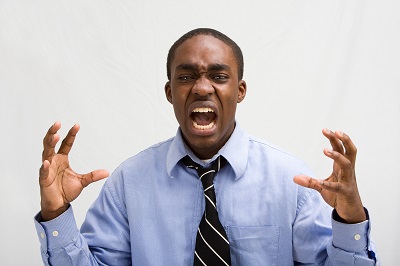 Here is the intriguing story of Mr. William Ojo, a 40-year-old business man who was jailed for smuggling drugs. While he was in prison, ‘the First Lady’ came visiting in a bid to encourage and give hope to the prisoners for a better life after prison..
Two years later, William Ojo came out of jail and returned home with an unusual excitement of finding a true love in prison, the possibility of this was questioned but William was so sure that he was getting married to the First Lady. He claimed that she came to see him in prison and fell in love with him, that they got so intimate and planned on getting married, that she was ready and willing to leave her husband(Mr President) for him (William) on the condition that William gets a monitoring device implanted in his scrotum to assure her of his faithfulness. He believes that he had the surgery and the device was in his scrotum.

This behaviour alongside some other strange acts (social withdrawal, hostility, inappropriate laughter) made his brother take him to the psychiatric hospital where he was diagnosed with a form of Schizophrenia.

When the word, schizophrenia is used, it seems far-fetched, like an illness of the whites, but truly it hits really close to home. Schizophrenia is another word for ‘madness’. The saying “Many are mad but few are on the streets” is probably true.

What you need to know about Schizophrenia:
Schizophrenia is a challenging disorder that makes it difficult to distinguish between what is real and unreal, think clearly, manage emotions, relate to others, and function normally. There is loss of contact with reality (as with the case of William Ojo who had his imagination all muddled up with reality).

Most cases start in the late teens or early adulthood, more common in males than females, especially the very intelligent ones. *so its safe to want to be dull if it decreases the risk factors right??*

It affects 1% of the population. (Now think of ALL the mad people you have come across, and you’ll find out that, it’s really VERY common)

Causes
Current thinking is that some people may be prone to schizophrenia, and a stressful or emotional life event, substance abuse(cocaine, weed etc) might trigger a psychotic episode. However, it is not known why some people develop symptoms while others do not.

The exact causes of schizophrenia are unknown, but research suggests that a combination of physical, genetic, psychological and environmental factors can make people more likely to develop the condition.

*The most common early warning signs include:
•Social withdrawal
•Hostility or suspiciousness
•Deterioration of personal hygiene
•Flat, expressionless gaze
•Inability to cry or express joy
•Inappropriate laughter or crying
•Depression
•Oversleeping or insomnia
•Odd or irrational statements
•Forgetful; unable to concentrate
•Extreme reaction to criticism
•Strange use of words or way of. speaking

While these warning signs can result from a number of problems—not just schizophrenia—they are cause for concern.

¤Positive symptoms
•Strange thinking (‘thought disorder’)
thoughts and ideas may seem jumbled and make little sense to others. Conversation may be very difficult and this may contribute to a sense of loneliness and isolation.

Voices can be familiar or strange, friendly or critical and might discuss their thoughts or behaviour. The voices may tell them to do things.

According to some research, up to 4% of the population hear voices. For most people, the voices they hear present no problem and are not associated with schizophrenia.

•Delusions
Delusions are usually strongly held beliefs or experiences that are not in line with one’s socio-cultural and educational background, e.g. believing Michelle Obama is in love with you or you are a supreme being – Jesus Christ, you might believe secret agents are following you or that outside forces are controlling you or putting thoughts into your mind.

•Lack of emotional expression – Inexpressive face, including a flat voice, lack of eye contact, and blank or restricted facial expressions.
•Lack of interest or enthusiasm – Problems with motivation; lack of self-care.
Seeming lack of interest in the world – •Apparent unawareness of the environment; social withdrawal.
•Speech difficulties and abnormalities – Inability to carry a conversation; short and sometimes disconnected replies to questions; speaking in monotone.

Negative symptoms can be very difficult to tell as its mostly seen as ‘normal’.
E.g an 18-year-old boy, who is quiet, keeps to himself all the time, with few friends, and doesn’t go out, is seen by his parents as the best of sons, as opposed to that who keeps trying to convince everyone, he has powers from God to take away the sins of man..

They occupy a world that is very real to them, they conjure up entirely new worlds, new systems of organization, communication and invent languages. To them, you are the mad one, they are as scared of you, as you are of them. But there is still hope as
Schizophrenia can be successfully managed.
•The first step is to identify the signs and symptoms.
•The second step is to seek help without delay by going to the psychiatric hospital closest to you, to get expert care
•the third is to STICK with the treatment.
With the right treatment and support, a person with schizophrenia can lead a happy, fulfilling life.

One thought on “Who is Mad or Schizophrenic?”