Top 5 Games To Install On An Android And iOS Smartphone

There are thousands of games available for both Android and iOS, however, finding the right one that suits the gamer’s needs can be a difficult task. Some users resort to screenshots, while others depend on videos of the gameplay. There are a couple of free and paid smartphone games available at both application stores that are developed with a large audience in mind, and today five of the best will be exposed.

Pudding Monsters is currently ZeptoLab’s latest released game available for both iOS and Android. The game is free Via Google Play, while it will cost the consumer some pocket change to download from the Apple App Store.

Pudding Monsters is a puzzle game where the gamer is on a mission to save puddings from getting eaten by the cold-hearted fridge owner. During the gameplay, the user is required to stick the pudding monsters together so that they can’t be taken advantage of. With 75 levels and more to come, the game will have the user occupied for several hours.

The free version of Fruit Ninja is available for both Android and iOS mobile operating systems. Both platform games are similar in gameplay, however, they differ in accessibility. The free Android version of the game gives the user access to classic, zen, dojo and the new arcade mode, while its free iOS version only gives the user access to the classic mode of the game. The only way to unlock the remaining game modes for iOS and the exclusive Game Center Multiplayer mode, is to purchase the full version of the application.

Temple Run 2 is the sequel to Imangi Studios’ original Temple Run game. Although the game is available for free at Google Play and Apple’s App Store, consumers can also choose to purchase additional items for in-game use Via in-game purchases.

For more information about the game, read the full review of Temple Run 2.

Angry Birds is not only well known on smartphones and tablets, but also Windows computers and to Internet surfers. The game is free for both Android and iOS, however, that does not stop Rovio Mobile from placing their third party advertisements in the game for downloaders to view and for the company to make some revenue. 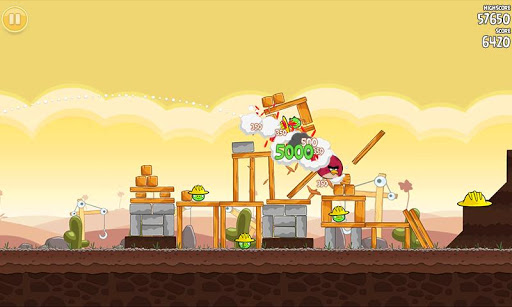 Available for both iOS and Android devices, Jetpack Joyride is definitely the best free jetpack riding game available for smartphones and tablets. The game starts when Barry breaks into a secret laboratory to try out the experimental jetpacks from evil science geniuses.

Take note that devices with a CPU frequency of 600 MHz or less will not be able to run the game. Halfbrick Studios noted a couple of Android smartphones at Google Play that are affected by the issue :