The long awaited port of Imangi Studios’ Temple Run 2 is now available for Android. Starting today, Android smartphone and tablet owners can get themselves a copy of the game at the Google Play store. The game is free to download like its iOS version, however, if you need additional coins without having to worry about collecting them yourself during the gameplay, you can always throw a couple of dollars at the developers Via in-game purchases. That, or you can collect free items for the game such as gems and coins in exchange for liking Temple Run 2’s official FaceBook page or Twitter account. 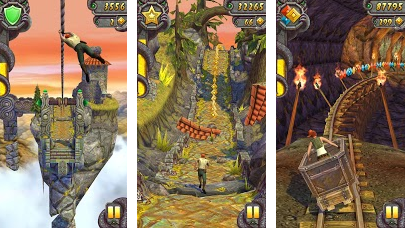 The graphics and animation work of Temple Run 2 is an improvement to its original game, Temple Run. Not only that, but there are a couple of new things that make it different from Temple Run. Besides the new lines that they throw at you when you die, there is a large gorilla (or I just want to believe it is a gorilla rather than a large abnormal monkey) chasing you instead of several hungry monkeys, new obstacles, new achievements, much more power-ups, and new characters with their own special power. Before you can test run the new characters, you will be required to unlock each one for a specified amount of coins. It’s also possible to upgrade a character’s power-ups and abilities by spending in-game coins.

After testing the Android game out on a quad-core CPU tablet, I noted that the game took longer to load when comparing it to an iPad 4. While playing the game, I experienced no lag or crashes. The Android version of the game works just like its iOS version and its file size is around 33-35 MB therefore having enough storage space to keep the game in your device’s memory will be no problem at all.