Spooky Stories behind Friday the 13th! 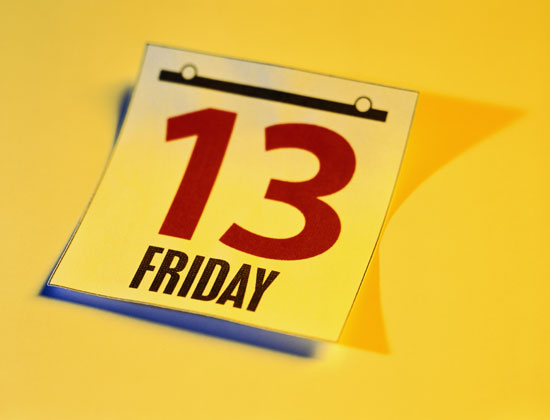 Today is Friday the 13th, a day popularly known to be fraught with bad-luck, misfortune and accidents!
Now, one good thing about Nigerians is that we are a deeply religious people and therefore the fear of Friday the 13th also known as paraskevidekatriaphobia is almost non-existent.

In actual fact, there is no logical explanation as to why people are unnaturally scared of Friday the 13th but one thing is sure- the mystery of Friday the 13th is shrouded in a lot of superstitions and myths. The superstitions, however, does have deep, compelling roots and the origins help explain why the belief is so widespread today.
In this article, we’ll look at some of the interesting stories behind this unluckiest of days.

The number thirteen was considered by the ancients as irregular and transgressing completeness as compared to the number twelve which was popularly considered as the number of completeness, as reflected in the twelve months of the year, twelve hours of the clock, twelve gods of Olympus, twelve tribes of Israel, twelve Apostles of Jesus, twelve signs of the Zodiac, etc.

In Christian theology, the number 13 is significant to Christians because it is the number of people who were present at the Last Supper (Jesus and his 12 apostles). Judas, the apostle who betrayed Jesus, was the 13th member of the party to arrive. There is a superstition that having thirteen people seated at a table results in the death of one of the diners!

Also, Christians all over the world had more reasons to be wary of Fridays as Jesus Christ was recorded to have been crucified on a Friday. Additionally, some theologians hold that Adam and Eve ate from the forbidden fruit on a Friday, and that the Great Flood began on a Friday.

Another significant piece of the legend is about a particularly bad Friday the 13th that occurred in the middle ages- The story of the Knights Templar. This story was popularised in Dan Brown’s 2003 novel The Da vinci Code. The story holds that on a Friday the 13th in 1306, King Philip of France arrested and tortured hundreds of revered Knights Templar, falsely accusing them of trampling and spitting on the cross, homosexuality and idolatry all in a bid to confiscate their wealth to increase the prestige of the crown.

Also, In British tradition, both Friday and the number 13 were once closely associated with capital punishment as Fridays were the conventional days for public hangings, and there were supposedly 13 steps leading up to the noose!
These are just but a few of the stories associated with this supposedly unlucky day.

It is pertinent to note,however, that these complex folklores of Friday the 13th has little or nothing to do with the fears that people experience today. In actual fact, the fear has much more to do with personal experiences. At a young age, people learn that Friday the 13th is supposed to be unlucky, for whatever reason, and then they look for evidence that the legend is true and evidence isn’t hard to come by. Let’s say for example, you were once in a car accident on one Friday the 13th or you lost your wallet, fell into a gutter or got dumped by your man/woman, you would obviously never forget that day. It just doesn’t mean that day is especially unlucky!

However, if we think about it, bad things, big and small, happen all the time. So therefore, if you’re looking for bad luck on Friday the 13th, you might probably find it! Be careful what you wish for! *winks*

2 thought on “Spooky Stories behind Friday the 13th!”