Way out to violence against women in Nigeria. 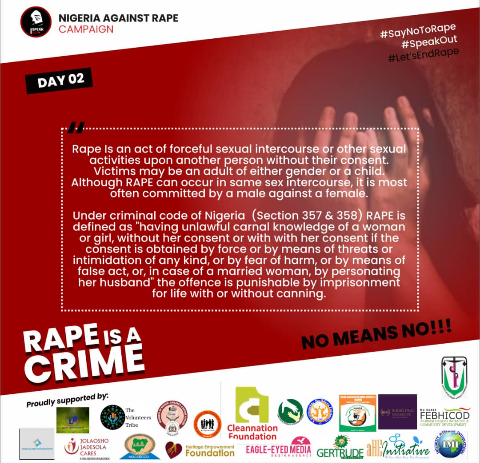 Way out to violence against women in Nigeria.

Rape is one ugly topic that will not just go away in our society. This year alone,there has been a number of high profile of rape incident,in some of the cases the victim was even murdered. Though it is not all rape cases are clear out, so for those who are not sure where conceptual sex ends and rape starts.

Here is a definition that can help you establish a clear distinction. Though the definition of rape differs from place to place,for example in the United kingdom (UK), sexual intercourse with a girl under 16 years is define as rape,even if the girl consented to have sex. In Scotland if you start a sexual intercourse with your wife and at one point doing the act she said stop,if you don’t stop from the morning moment she said “stop” you are raping her.
In Nigeria,the Yoruba’s culture see rape as when you force a woman or a girl to have sex without her approval or you forcefully sleep with an innocent girl who knows nothing about what sex is, they see it as rape. Also the Yoruba’s see you as a rapist when you start touching a lady forcefully in all her sensitive parts, they will say this in their dialect i.e their language, “shéè o fé fì ìpà bà lópóò níì”.

According to WARIF (The women at risk international foundation) says,” African has the highest prevalence rate of child abuse around 34.4 percent and between 2012 to 2013 30 percent of women in Nigeria experienced rape form of domestic violence or another. In the same study it was found that 24.8 percent of females’ ages 18 – 24 years experienced sexual abuse prior to age of 18 of which 5.0 percent sought help,with only 3.5 percent receiving service.

Rape is a barbarous act that shouldn’t be condoled in any society. Yet in many Nigerian society, the act of rape has become so prevalent that new incidence of the act comes up almost everyday in many Nigerian societies.
It is so unfortunate that a lot of ladies have fallen victim of being raped by men who probably can’t control their sexual urge. These kinds of men in a bid to actualize their sexual desire,force themselves on a woman.

However, it is quite pathetic that rape cases are not only centred on matured girls and women but even young girls that have no prior sexual education or knows what sex means. A lot of these adolescent girls are sexually assaulted by their close relatives and family friends like father, uncle, neighbour, husband and brothers.
It is natural that men have more sexual urge than women, yes that normal, but it shouldn’t be used against their opposite-sex gender or used to hurt them.

How can the incident of rape be reduced? What men can do.

In a lot of situations, the chief causes of rape among other things is the uncontrollable urge for sex on the path of many male adults.

1. Severe punishment for the rapist.

One of the most active and efficients ways to reduce the incidence of rape on the path of the male sex is to intiate a cruel or severe punishment for a rapist. This will enable potential rapist to have change of mind when looking at the consequences of raping or sexually assaulting anyone. Countries that have established cruel laws against rape include India,China, Egypt, Saudi Arabia, Bangladesh, Pakistan and North Korea.
In Nigeria, the assistant police commissioner for violence against women said,” more men are also being persecuted for rape” that is, preventive measures are also being taken in Nigeria against rapist.

2. Men should be guided.

Men should guide their heart and thought against rape because” it is not everything an eye see that its must taste“. Men should guide themselves against all sought of bad thought that could eventually leads them raping a girl or a woman because” paying bride price is not a license to beat or rape your wife” – according to the Nigeria human rights commission (NHRC).

3. Men should also campaign against rape.

How to avoid rape on the path of women or girls.
1. Ensure wearing clothes that cover all the sensitive parts of the body.
It has been noticed that most 60 percent of the raped victim is due to their indecent dressing which exposes all sensitive parts of the body and when men sees this they become uncontrollable and their urges for sex increases, which might eventually lead to rape of such lady because it is not all men that can control themselves.
There is an adage that says” the way you dress is the way you will be addressed”, yes it is true. Henceforth, women should take an active step in dressing well and decently because it is not all clothes that are meant for outside journeys.

2. Avoid walking alone in the night.
Walking alone in dark places can be very dangerous because no one can predict what will happen. So it is always safe when you walk together in a group during the day and not alone. Avoid passing a place or environment you always noticed to be very silent and quite,it could be very dangerous.

3. Avoid staying alone with a man in a room or with anyone you do not feel comfortable with.
Staying alone with the opposite sex in a room is not secured enough since human thought is known to be very powerful and it is not everyone that can control it,so things might go wrong and leads to another thing or rape. So ladies should be very careful whenever they are in a man’s room or don’t even plan going there.

4. Avoid going to a man’s house without someone knowing about  it.
If probably a lady had to go to a man’s house,she should ensure telling someone close to her that she can trust or someone in her environment,in case if anything goes wrong such lady can be easily traced.

5. Avoid posting of naked pictures on the social media.
Posting of naked pictures on social media is not appropriate and decent,such photos can go as far as one has imagined. With the internet,it makes things easier since” bad news spread faster than good news” the same applies to naked photos being fastly spread and when men sees this they get aroused and when they couldn’t bear it anymore, they look for a way by tracing such lady and raping her. So indecent dressing and posting of naked photos by ladies should be stopped.

6. Avoid insultive words on a man whenever he asks you out.

Ensure saying good words at all times with this its becomes part of you. Whenever a man asks you out, kindly answer him correctly whether you are interested in him or not and if “ No” that didn’t give a room for an incurable insult on the man which might steer him up to do the worst thing he might ever imagine,he has the courage that why he approached you so always learn to stay positive in good words and not negative.

7. Avoid being a playgirl.
As a lady,if you are not interested in a man or you did not love him,be plain with him and avoid deceiving him so that he would know his way. The moment such a man noticed you are playing him up,he might be angered or frustrated to do the worst thing you might ever imagined,so ladies should stop this act.

8. Be understanding and be understandable.
Communication is powerful because good words are always important in every communication. Women should make themselves understandable to men in the right and good way. They should learn to easily understand every word they hear and not take it personal i.e in the wrong direction.

9. Avoid forcing yourself on men.
Women shouldn’t force themselves on men for a relationship he is not ready for, maybe he did not love you and you are forcing yourself on him. This might make such a man not to take the relationship seriously or perhaps he might be doing anyhow to hurt the lady.
This habit should stop among ladies and women for self respect and dignity to themselves.

10. Avoid demanding too much from men,if he gives you take it.
High demand for money from a man might not make the relationship a genuine one. Money is important and needed to keep things going and flowing together in the right place but it shouldn’t be demanded too much.
Always ensure you are doing something i.e a good work to take care of yourself or do your office job properly in assisting the man in taking care of yourself and not putting most of your expenses on him.

12. Women should always learn to speak up.

Research has been made by the Nigerian human rights commission (NHRC) that 55% of women or girls who have experienced physical or sexual violence have never sought help or told anyone about it, it’s true and it’s very bad. Women and girls who has been physically and sexually abused should try to speak out to anyone around them who can really help them or report to the nearest police station around them, to avoid being abused again by such men.
Women or girls shouldn’t keep quiet because of any threat from the man or any where,but should rather speak up to someone who will help them and by doing this such women are also taking their part in stopping rape or sexual violence because punishment will be melted to such man or rapist as said by the assistant police commissioner.

Women’s and girls should learn self defense i.e how to defend themselves from anyone who wants to rape or assault them, without holding any harmful material. Self defense is compulsory and necessary.
Here are some 7 self defense techniques for women.
i. Back attack.
If a man attack you from the back,you can immediately him with your bag at his face and chest i.e you bag punch him and with your legs at his groin,then run.

ii. Strangulation attack.
If it is strangulation,you immediately put your hands up at the middle of his hands and press your fingers in his eyes,then run.

iii. Seizing hair attack.
If it is pulling hair attack,you try and remove or lock his hand from your head,go under his arm,twist his hand and push him forward,then rrun.

iv. Rear back hug attack.
You backstroke him to the jaw and noise with your head,hit his feet with your heels or shoe,then run.

v. Wrist hold attack.
You immediately unscrew his arm from the your body,then run.

vi. Hand grip attack.
You immediately bite his hand while holding his hand,give him punch at his throat,then run.

vii. Side attack.
You immediately palm strike him i.e you strike the man with your palm in his face,then run.
Remember the key points: his eyes,his throat,his nose,his solar plexus( chest),his groin and then his knee.