The Griot: A review of the Nollywood Masterpiece 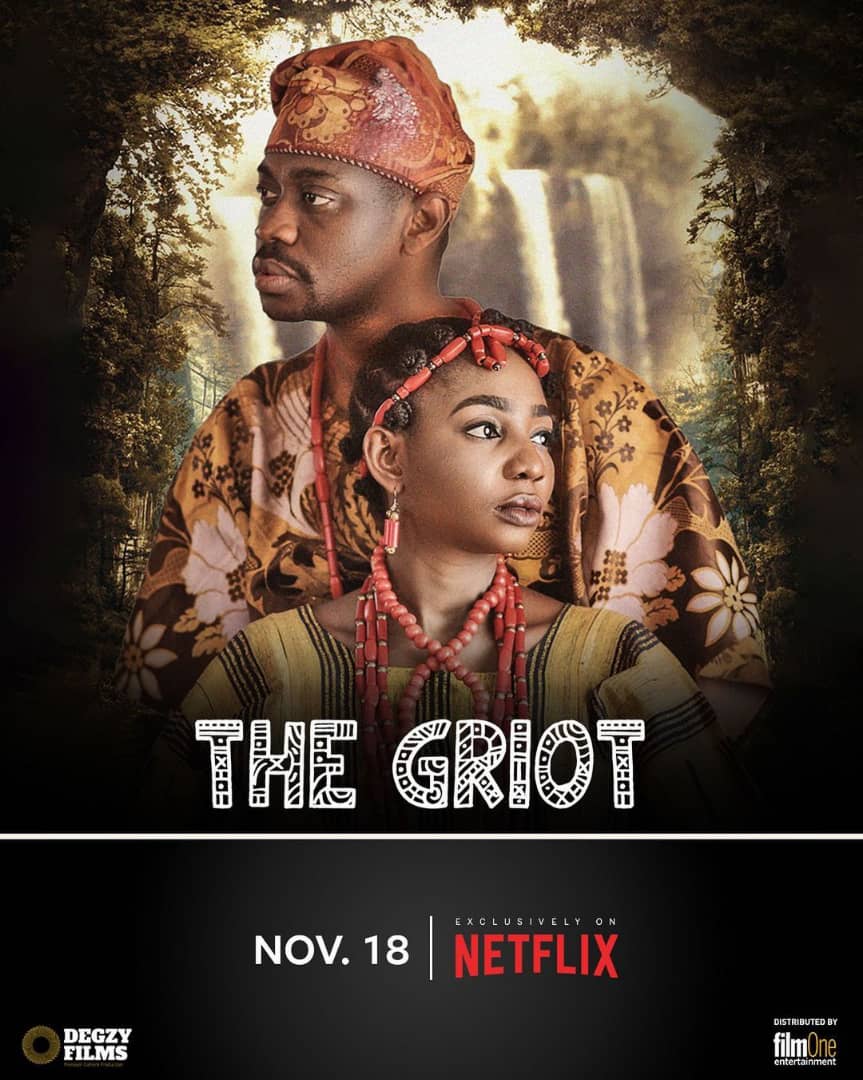 A timid but talented storyteller gets into a fight with his closest buddy when the latter tries to steal the glory from his tales and win the affection of the woman they both desire.
This review does not contain spoilers!
The plot of this movie will already give you an idea of the likely actors that could appear in it. It will surprise you that there were only a handful of top actors in this movie and a sea of upcoming actors and newbies. Nevertheless, there were exceptional actors in this movie that we would not mind seeing on our screens over and over again and for a very long time to come.

If you’re like me, except for one or two names, we barely know who these other guys are. This raises the question: What did they do to earn the No. 1 spot on Netflix for several days? You know, it’s giving “Sholape what did you add to your stew?”

The first thing to notice about this movie is the setting. From the very first scene, you could tell that we were getting another addition to the stream of indigenous movies that have been rolled out steadily this year. However, what immediately jumped out at me was the fact that they were not speaking the indigenous language, even though the setting seemed to date back to the 1980s. This was a clear deviation from the pattern that its counterparts the likes of Anikulapo and Elesin Oba, had established. I wouldn’t say this is a major blocker for me because, in the real sense, English was already a lingua franca around that period. While this might have watered down the effect of culture in the movie, it is not a blocker.

It would not be fair to not appreciate the cinematography of this movie. The colour composition, the lighting, and the sound magnified the work of art that was “THE GRIOT”

The Griot focuses on a trio. Two friends and their love interest. Although this seems to be a romantic film with a tint of an emotional rollercoaster, as you would typically have in any love triangle, it doesn’t do much to evoke emotions. I could barely connect with any of the characters. This might have been because the story really wasn’t strong enough to provoke any emotions or because I’ve gotten used to these kinds of stories.

There were repeated mentions of the popularity of Tiwa, but next to nothing was done to emphasize this point. The only scene that came close was at the youth festival, and Goodness Emmanuel could have delivered better on that scene.

Another major plot hole is the festival. A lot was said about the festival, and it was one of the highly anticipated scenes for me. Oh well, I expected anything but a gathering that was only a few people larger than a parlour gathering. For a festival that supposedly pulled people from different villages, you would expect a much larger gathering. Why did they have to use a hall anyway?

The story steadily rocked us through friendship, love, romance, beautiful storytelling, betrayal, and the part that we did not see coming. Tragedy. There was a consistent ring to the plot until the last scene, which abruptly threw us into an utter state of confusion. It is understandable that the writer must have tried to introduce a plot twist. However, we could have used a happy ending instead of a tragedy that seemed like an afterthought.

Now, let’s see what Sholape added to her stew!

We might not have seen the starring actors in A-rated and celebrity-laden movies, but these actors definitely brought their A-game to this project. Oladimeji Lateef embodied the character of Lakunle so well it got exaggerated at some point. Lakunle was portrayed to be a timid and shy storyteller that just wanted to live in his world of imagination and weave nice clothes. However, I must admit it got off-putting at some point. Also, it would have been great to actually hear him tell a story.

Considering that a large percentage of the cast are Yoruba actors, the delivery in the English Language was sterling.
Most of the supporting actors clearly put a lot of effort into delivering their best for this project. Oladele – Lakunle’s father – was an absolute delight to watch.

1. Friendship: Lakunle and Sanmi shared a bond that can be likened to the biblical Proverbs. So strong was their bond that Lakunle didn’t mind Sanmi taking the accolades for the stories that he birthed.

2. Love: In the love triangle, we experienced genuine love and obsessive love. Although the love triangle was more of a straight line accentuated by another line. Lakunle and Tiwa shared mutual feelings while Sanmi’s feelings were basically one-sided.

3. Betrayal: Unchecked cleverness and envy are some of the ingredients that ruin the broth of great friendship. Sanmi decided that his love interest was the same girl his shy friend has eyes for. Not just a love interest, but one that he was supposed to speak to on behalf of his friend. You can imagine Sanmi maximized the opportunity he had to claim his friend’s love interest.

4. Tragedy: The movie ended with the death of one of the major characters. This didn’t trigger any feelings within me but it might be different for you.

The movie is good folklore, maybe not the best, but definitely, a beautiful story that could be easily recreated among upcoming theatre groups. I’ll give it a 6/10. A watch would not be a waste of your time, I promise.

THE GRIOT is still available on Netflix.

Nigeria’s Rising Fashion Designers: A look at the Emerging Talents in the Nigerian Fashion Industry