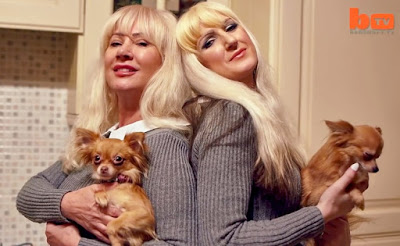 MOTHER SPENDS 58 MILLION USD TO LOOK LIKE HER DAUGHTER

A mother who spoke on Barcroft Tv  ‘Plastic Surgery Stories’ openly spoke on the show about how she spent approximately $58,000 so as to look like her daughter, just because her daughter is extreemly beautiful.

The mom, Janet Horrocks reasoning, that she she loves her daughters looks Jane Cunliffe, and since she made her, she (mum), would love to look like her.

She has severally been mistaken as the sister of her own daughter, but she admit, she feels proud, anytime someone mistakes she and her daughters as sisters.
The mom an daughter now shares: a high chin, platinum blonde hair and defined lips.