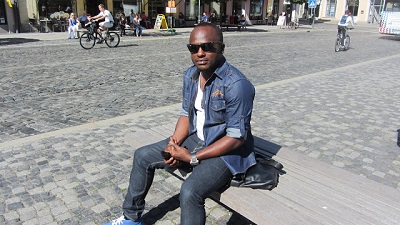 Part One Of This Interview Can Be Found Here.

Bubemi: Way back in Benin, it seemed like you and “I go dye” were close friends, please tell us about your relationship with him how both of you met.

I go save: (smile…) It all started in Warri, i go dye and i have been friends for over 20 years and comedy brought us together, i was in social variety club in Essi College Warri and i was their “mock newscaster” while I go dye was in same club in college of commerce Warri, as their “mock newscaster” as well and we both met during the clubs zonal meeting and decided to come together as a team in casting the news which lead us to the DTV TOP SHOW on Delta Broadcasting Service Warri. We have lived like brothers from the same mother over the years and still counting.

Bubemi Tell us about your show “I Go Save Unusual” ?

I go save: Unusual debuted in 2009 and it was a huge success, I will say “I go save unusual” transformed the concept of shows in Edo state and even the south of Nigeria because it paraded different comic and music acts unlike the normal one musician and lots of upcoming acts at event, “I go save unusual” debuted with the best of Nigerian comic and music acts like ALIBABA, I GO DYE, BASKETMOUTH, GORDONS, KLINT THE DRUNK, TIMAYA, MI, AY and more. We did the show targeting 2,500 people but we ended up having over 4000 people to entertain.The show went smoothly with a perfect timing starting at 11pm and ended around 2:30am. The 2nd edition in 2010 was even bigger and better. Although finance was a problem as I was doing all with my hard-earned savings which is always not enough because to achieve a classy event as I
desired will cost up to N13, 000,000 (thirteen million Naira) or more.

Bubemi: Any plans to do any comedy show this year, there are speculations that lack of sponsorship as caused you to hold back ?

I go save: Yes i wish to do a show towards the third quarter of this year if we find a very good sponsorship deal or partnership, sincerely my event company “Entertainment optionz” couldn’t put up a show because of the high cost of packaging an “A class” show and to add salt to injury, sponsorship was another big blow. But this year by his grace we are talking with an international firm that love to identify with the “I go save” brand and if we come to a very good deal it will ease our stress a bit.

Bubemi: What is the best decision you have taken as a comedian ?

I go save: Roosevelt once said ” Somewhere along the line of development we discover what we really are, and then we make our real decision for which we are responsible. Make that decision primarily for yourself because you can never really live anyone else’s life, not even your own child’s.” the best decision i ever took was to follow the right path of my heart and be me.

Bubemi: What is the worst decision you have taken ?

I go save: I wont say any decision was ever wrong because each time i fail it teaches me on how to do it well next time.

Bubemi: What is the most important thing in your life you can’t do without ?

I go save: I don’t attach a lot value to visible possessions. One fact I believe in is mind which keeps me going in good or bad times so my greatest possession is my mind and I can’t trade it for anything.

Bubemi: Tell us about your tours around the world with other comedians, how will
you describe the acceptance of Nigerian comedy beyond the shores of our land ?

I go save: Well….., its been quite ok and it keeps getting better and better from the I GO SAVE LIVE IN EUROPE tour, LAUGH IT OFF WITH AFRICANS live in Spain with I GO DYE, BASKETMOUTH, KLINT DA DRUNK and I GO SAVE, I GO SAVE & I GO DYE
LIVE IN BELGIUM, THE FRENCH CULTURAL WEEK IN PARIS with KNEM OWOH, RICHARD
MOFE DAMINJO, STELLA DAMASCUSS, SEGUN ARINZE, I GO DYE AND I GO SAVE, THE
LORDS OF THE RIBS TOUR UK. with BASKETMOUTH,I GO DYE, BOVI, BUCHI, ICE
PRINCE and I GO SAVE, The AFRICAN KINGS OF COMEDY TOUR UK, USA and CANADA.

The acceptance has been massive so far as Nigerian stand up comedy have gotten his way into homes all over the world and each country we go to, the people always come out in thousands to feel their favourite acts.

Bubemi: Guess you have achieved a lot in your career, is there anything left for you to accomplish ?

I go save: Accomplishment can be trace to success in doing or completing something, and i still have a lot to accomplish around my career, i have not achieved 90% of my target, i am yet to own my own 24hrs comedy satellite television station, have Katt Williams, Chris Rock and Eddie Murphy
perform at my own comedy show, have over 70,000 people at my OTAS I GO SAVE 100% show and most of all I am yet to make money (laughs…..).

Bubemi: What does it cost to host big shows ?

Bubemi: With the stiff competition in the industry, what distinguishes you from other comedians ?

I go save: “I go save” is a “brand” and as a brand the only thing that distinct you from others are the ways you do the common things uncommonly well, the way you package your jokes and the way you present yourself, for example, i deliver my jokes with a lot of energy and i stress on the things i talk about on stage. If i have three persons involved in a particular joke, i try to portray and demonstrate the three persons in such a way the audience would feel they are actually seeing the three people on stage. I display a lot of energy and i do a lot of description on stage. I deliver my jokes depending on the kind of event or audience i find myself.

Bubemi: Are you a proponent of using real life events as butt of joke or using fiction ?

I go save: Well i do both but i think fiction is fading out and making way for real life happenstance, gone are the days of telling jokes of there was a lion who went to a bank to see for a job or there was a monkey that was speaking pidgin English language these set of jokes are becoming stale, the trend has metamorphosed to what encompasses our daily life and these are the things that brings laughter because most times you realize it has happened in your life our have witnessed it after a comedian have said something brilliantly from what you never reasoned and that’s called punch line.

Bubemi: Tell us about family, marriage, reproducing and more ?

I go save: I am not married yet, but i wish to raise the best kids in the Godly way anytime soon.

Bubemi: You have a music single titled “confession” with an “A class” video, do you intend going into music ?

I go save: Well that song was a remix of p square’s song titled “story”, i only changed words and made it comedic, i don’t think am a good musician except i will be trained to, because the song i did was filled with me singing off-key (laughs….) I shoot the video in Austria and in Spain and its main aim was just to make people laugh.

Bubemi: Your love for cars is known, what is your choicest car ?

Bubemi: What do you really want from God at this moment ?

I go save: I pray to God for good health, wisdom and unstoppable success!!!

A very big thank you for your time i go save, wish you all the best in your career.