Cause Lots Of Mayhem In Jetpack Joyride 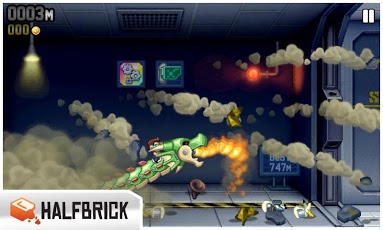 Jetpack Joyride is a fun arcade style game that is available for Android, BlackBerry, iOS, and Windows Phone 8 devices. The game was created by Halfbrick Studios, and is currently one of the most famous free apps in application stores.

To describe the gameplay in one word, the word of choice will definitely be “fun”. That is because the game provides the gamer with never ending fun. Collect coins, complete missions, pickup power-ups, and give the slot machine a spin after collecting special coins during the gameplay.

In addition to all of the above, the user can purchase different jetpacks to take advantage during the gameplay by spending coins that they collect (or buy via in-game purchases). That’s not all folks – the stash gives the gamer access to different clothing, utilities, and gadgets. The game also includes power-ups that Barry can collect during random points of gameplay to help him on his trip.

Are the controls all that?

To play the game is simple. All that the user is required to do is touch the screen of the device. A simple touch on the device’s screen gives Barry, the main character of the game, the ability to ascend using his jetpack (the machine gun jetpack). By doing nothing while Barry is in the air, he will descend and start running as soon as he hits the ground.

What about its graphics?

There is no doubt that the graphics are great. If for some reason you are having doubts, take a look at a couple of in-game screenshots below. It is important to note that the device’s graphics processing unit has a part to play in all of this, however, high-end device owners have nothing to worry about.

( What happens when Barry picks up the Dragon power-up ) 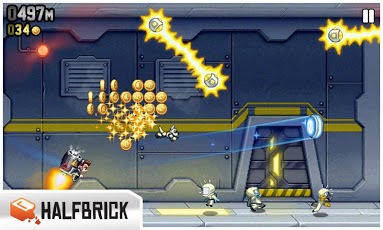 Overall, is the game worth downloading?

Yes! Jetpack Joyride is free, and is definitely a game to try out.