18 of the best Shakespeare Podcasts for Students. 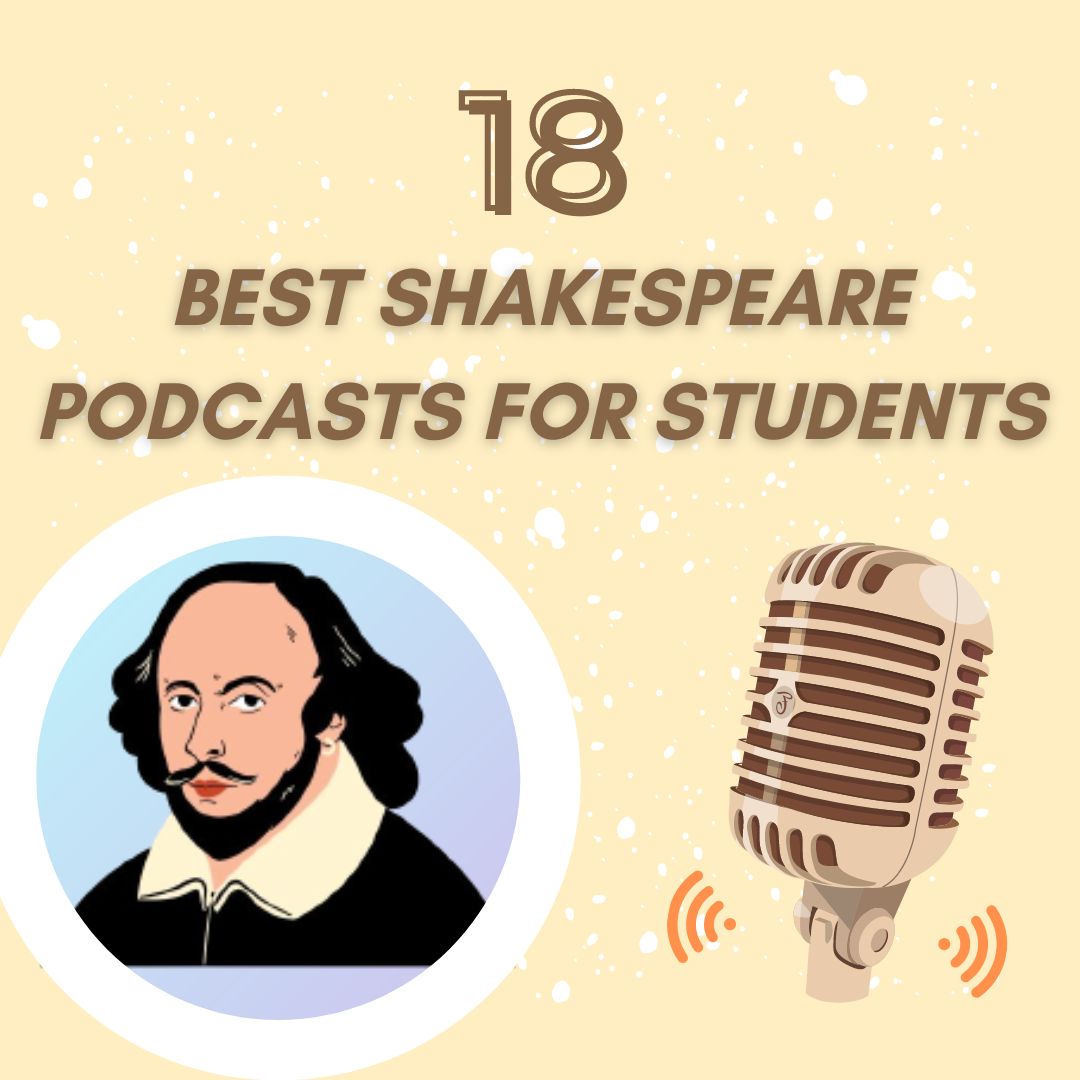 Reading and learning Shakespeare can seem difficult at times for today’s audience as the use of its language dates back to several centuries ago. Common difficulties readers come across in any Shakespeare book are archaic words, coinage, and borrowings from other languages.

To help in these struggles, several podcasts have been dedicated to reading and explaining in detail the Shakespeare language.

Perhaps, you might be among the readers looking to perfectly understand Shakespeare. This article will guide you in knowing several podcasts for Shakespeare’s audience.

Hosted by Diana and Erin, two friends who met over a cuppa Shakespeare. FckShakespeare podcast, with the use of humour and some form of profanity, dissects every bit of some Shakespearean work like Othello, Macbeth, Hamlet, and more. They focus on the complexities surrounding the words and actions in these books and inspire readers to discover new ways of bringing Shakespeare to life. The podcast contains sexual language and a discussion of drugs and drinking. Which is one of the favourite past time of students. That is what makes this one of the best Shakespeare podcasts for students.

FckShakespeare might not be the most academic podcast for Shakespeare but it is certainly a podcast that combines learning with entertainment. Not only do you have a great overview of each episode but you also have fun alongside.

This podcast would be a good recommendation for anyone looking for a Shakespeare podcast packed full of knowledge and at the same time hilarious.

Shakespeare Unlimited might be the best go-to for anyone seeking to understand Shakespeare on a deeper academic level.

Owned by Ehren Ziegler, each episode on this podcast is released each Sunday. The podcast originally started by discussing Shakespeare side notes but as time goes on, it began analyzing Shakespeare’s sonnet per week. So far, Ehren has covered about two-thirds of the 154 Shakespeare sonnets.

One of the best podcast resources for Shakespeare lovers, the Play’s the Thing releases six episodes to each play, one per act and a Q&A episode. The podcast explores not just the scene, themes, and characters of each play but also pins outlines that make Shakespeare memorable.

And educative and entertaining platform hosted by Dan Beaulieu and Kevin Condardo who are directors of the Seven Stages Shakespeare company in Portsmouth. They analyze the plays, discuss the not-so-easy-to-understand words, and talk about the different interpretations of the Plays.

This podcast is also certainly not one of the most academic Shakespeare podcasts but it’s definitely one of the best for Shakespeare lovers interested in incorporating Shakespeare phrases into their daily lives. The two hosts at the end of each episode, select and read a quote from a play and devise ways it can be used in conversations.

Breaking Bard aims to disprove the mythic image created around Shakespeare by having honest conversations about Shakespeare and his plays.

Book Cheat is one of the best podcasts out there and this is because the host handles this podcast in such a way that an audience who has no idea about the play beforehand could at the end of the show have a proper understanding of the play.

On each episode, the host, Dave Waneke invites two special guests and tells them all about a play and at the end, both the guest and the audience could pretend or believe they have read it.

Twice Blest is not just like the regular Shakespeare podcasts. Twice Blest explores Shakespeare and the Hebrew Bible from the Yeshiva University Straus Center for Torah and Western Thought. The Host, Dr. Shaina holds conversations with faith leaders, scholars, and writers that connect the wisdom of Judaic to classical texts.

This podcast is the right podcast for anyone who wants to get the most out of a Shakespeare podcast but does not have the luxury of time to listen to the various hour-long podcasts. Each episode in this podcast is about 3 minutes long.

And in this BBC podcast, different people are invited to discuss the works of Shakespeare that they enjoy the most.

Different guests from around the world are invited to join resident Shakespeare Birthplace Trust experts, Paul and Anjana to converse about Shakespeare and the 21st century and how to have a different outlook on Shakespeare in the modern world era of today.

Though not a podcast dedicated to Shakespeare alone, the daily poem presented by Goldberry Studios curates a broad audio anthology of some of the best poetry ever written. The Host, David Kern with various contributors read aloud a poem each weekday morning. Commentaries are included and shorter poems are usually read twice.

Another fun and entertaining podcast where the host, Stephanie Crugnola is pitted against a guest each week. In each episode, Stephanie and the guest battle best-ofs in Shakespeare’s works, and the audience decide who wins through voting.

The podcast entails modern Shakespeare productions and on each episode, a panel of guests discusses a production of Shakespeare’s plays on stage or screen.

Hosted by Juliet Wolfe and Olivia Rose Nathan, Shakespeare lovers, actors, and sour beer drinkers. Each week, the two Shakespeare lovers give their opinion about different Shakespeare books over a new sour beer. Liveliness and drunkenness are two things that occur in this podcast in each episode.

Speak the speech by Bell Shakespeare celebrates some of Shakespeare’s greatest speeches with various best-known actors and directors.

The Shakespeare Theatre Company’s official podcast focuses primarily on plays from Shakespeare canon but its season includes works by other playwrights.

No doubt, William Shakespeare, sometimes known as the Bard still remains one of the most prestigious writer of all time and it is not surprising, several podcasts keep springing up to help students better understand their knowledge of his books. Now, with the help of these podcasts, students can easily enjoy reading Shakespeare without having to go through any difficulties in understanding the language.

You can go through and explore any of the podcast written above. Now, it’s time to have fun while reading!

How to Prepare For An Audition

Nov 23, 2022 Tosin Kolawole
We use cookies to ensure that we give you the best experience on our website. If you continue to use this site we will assume that you are happy with it.Ok