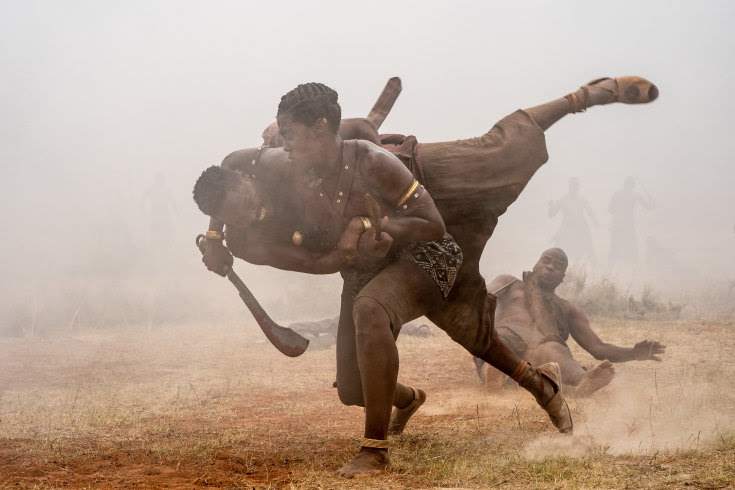 The movie was directed by Gina Prince-Bythewood and was written by Dana Stevens. The Woman King is no doubt a captivating and inspiring story, not minding some obvious shortcomings. From the characters, the visuals, choreography and down to  every other thing that makes up this epic action film, The Woman King indeed stands out as triumphant story in 2022.

If you really want to know what makes the film so good, here are some juicy” dets”which gives a clarification of what the movie is all about and what it truly depicts.

The film begins with the history of West Africa, 1823 and the focus is placed on the kingdom of Dahomey. Dahomey was a powerful West African state and is now known as the Republic of Benin. If you really pay attention to Afican history, you will notice that there is always war at one end or the other. Which is why the movie makes more sense with the recognition given to the historical battles between Dahomey, Oyo Empire and Mahi at the beginning and various scenes of the movie. Majority of the scenes in the movie are also representations of a part of history.

The centre point of this war is no other than the slave trade of Africans. It is quite fascinating that the movie points out there are West Africans who found the slave trade of their fellow Africans as a reasonable business. When King Ghezo mentioned to his people (the Dahomey people) that “An evil is coming that threatens our kingdom,”  he was clearly talking about the Oyo who saw themselves superior to the Dahomey kingdom. They place their captives in cages, enslave them and sell them to the colonizers. These are  people like Santo, a Portuguese colonizer. As seen in the movie, to put an end to the slave trade, the Agojie play a master role in fighting for their people. Asides that, the palm oil trade idea raised by the King’s right-hand woman, General Nanisca of the Agojie regiment, is seen as a good alternative to the enslavement of their people by the Oyo.

Talking about the female empowerment, the typical description of women are; weak and fragile. Judging by the actions of the Agojie, some say that description cannot be generalised to the gender. Nevertheless, even with their emotional resilience and physical strength, it is made clear that they too are not totally invulnerable as there are scenes where we find some of these women battling with their emotions. The Agojie of Dahomey kingdom is written down in history as a group of fierce and exceptionally skillful female warriors, forming part of King Ghezo’s military unit. They are seen as superheroes of Dahomey kingdom. The people cannot look them in the eye after their victorious return from battle and they are given special quarters in the palace. Just like the male fighters, the  Agojie warriors fought in slave raids. In the movie its is made clear that these woman have to go through rigorous trainings and tests. Putting their skills to good use, there is a  scene where we get to see mencaptured by the Agojie for attacking their villages or get in theirway. These captives are then sold off as slaves. These female warriors have to continue their lives as warriors who swear of getting married. Among the female warriors, the top stars are;General Nanisca (Viola Davis), Amenza (Sheila Atim), Izogie(Lashana Lynch) and Nawi (Thuso Mbedu).

Just as it was in the ancient Dahomey kingdom, the people and the warriors in The Woman King were loyal to their king and everyone worked hand in hand.  The Agojie were focused on protecting the King and the people by going through trainings, going to war against their enemies and living a life of celibacy. Even the young girls who got into the warrior group had to prove their loyalty. With a strong-will, General Nanisca was ready to face the Oyo without backing down and this is seen in her action where she threw the head of an Oyo man at the gate, this is clear proof of her loyalty to Dahomey and how ready she is to sacrifice herself. Knowing the type of rebellious yet smart girl Nawi is, she stood by her principle of leave no warrior behind. She went back for her fellow trainee during the test of young recruits who wanted to join the Agojie. She also stood by to save General Nanisca from the Oyos even she instructed that they all leave.Amenza’s sacrifice cannot also be forgotten. Igozie is also one of the Agojie’s most loyal and trustworthy warriors who was ready to make skillful warriors of the new recruits.

Nawi’s loyalty to Dahomey as a celibate warrior is however placed in a dilemma when she faces an attraction to Malik, a half Portuguese whose mother taken away from Dahomey by the colonizers. Nawi fell in love with Malik and their love faces a lot of trials. Luckily the start of the relationship between the two leads to Nawi’s discovery of the huge raid being planned but the Oyo. A mother’s love and sacrifice for her child isn’t found missing in the movie where Nanisca and Nawi discover their blood relationship. The discovery was with shark tooth found in Nawi’s body which Nanisca placed in her shoulder when she was given birth to. Unfortunately, they couldn’t be together at the time of her birth but the two are eventually reunited. This strong love makes General Nanisca go back to save her daughter Nawi who was held captive by the Oyos. King Ghezo also stands as king who loves his people and his warriors dearly. He also loved his wives but puts the Agojie first in terms of respect as he truly cherishes them.

Even through trainings and battles faced, the Agojie were able to build friendship. Amongst the young recruits, Nawi found two girls she became fond of, one of the girls is called Fumbe. Nawi particularly becomes close with one of the adult female warriors, one of  Nanisca’s lieutenant, Izogie (Lashana Lynch) who welcomes her as a part of Agojie and keeps her on her toes. There is also a bond between Nanisca and Amenze, judging by how Amenza stands by Nanisca when her past hunts her. We can also say that Nawi and Malik start off as friends in a unexpected way. This friendship then sets in their romance.

Here are other breath-taking moments which makes The Woman King a remarkable movie;

1. The outfits and weapons used by the Agojie and the male warriors, the dressing of the  people of Dahomey, the king, the King’s  wives, the dance performed by the Agojie at the end of the movie, all give the audience a clear picture of Dahomey’s style.

2. How colonialism leaves marks in Dahomey is seen in the use of guns and gunpowders during the training of the new recruits. This was put to good use by Nawi and help the warriors clear the hiding spot of the enemies.

3. Politics is seen to come to play in the movie where a decision is to be reached on who is to stand as The Woman King for Dahomey. This pulls the interest of Shante, one of the King’s wives. However, the higher chances of getting the position stands in Nanisca’s favour.

5. However, the most question part of the movie still remains the use of English as the main language. So many people find this to be in contradiction with the actual position of ancient Dahomey.

Nevertheless, we can all agree that The Woman King is worthy of the big screen and deserves the fame it now earns as a masterpiece.

Izogie (Lashana Lynch)- One of Nanisca’s lieutenant or right-hand women.

Shante (Jayme Lawson)-One of King Ghezo’s wives who scrapes attention and has a thirst for power.

Santo Ferreira (Hero Fiennes Tiffin)-  A Portuguese slave trader and friend of Malik who was eventually ripped apart by the freed captives.

Malik (Jordan Bolger)- Friend of Santo, half Brazilian Portuguese and half Dahomey.

Esi (Shania West)-An Agojie West, once teased by Izogie in the movie.