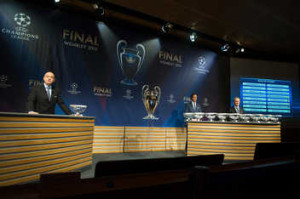 What if i told you that the UEFA Champions League and Europa League draws were rigged by UEFA? Well you could say being a Nigerian i have blinded by the amount of rigged elections in the past. But let me try to convince you a little.

The draws then took a Germany v Spain pattern which again now looks like a coincidence to you, but as we know the UEFA president is a fan of the Spanish language liga, so we then concluded its going to be an el classico final.

A friend who has followed football longer than i have told me “if Bayern Munich defeat Barcelona then Borussia Dortmund would defeat Real Madrid” it sounded a little bit strange as i could see the Barcelona defeat but not the Madrid defeat. But so it happened.

Does lightning strike twice in the same place??

You might ask why? Well last season the champions League final between Chelsea and Bayern didn’t yield the required revenue for uefa as that final wasn’t really what the fans wanted, most wanted a Barcelona v Bayern final, UEFA this season trying to set up a final that would bring them more money have already planned either an all Spanish or Germany UCL final.

You may then ask but the draws were done free and fair, we’ll that’s what you are meant to believe, the truth is there are “vibrating balls” in each pot and that’s the one the person picking is to pick, don’t believe? Ever asked your self why a random person from the audience isn’t asked to come pick a ball?. There is a short video to show you how it’s done.

The same thing was done for the Europa League draws, and there was no way Chelsea was going to get Benfica of Fernabache because when Chelsea meet either of them in the final its still going to generate revenue, FC Baseline being the least marketable club was the team sacrificed.

FIFA, UEFA etc… Are all about the money there is a cabal that influence things that we still don’t know and some that are just too numerous to mention.

VIDEO’S TO SHOW HOW THE DRAWS WE’RE RIGGED.