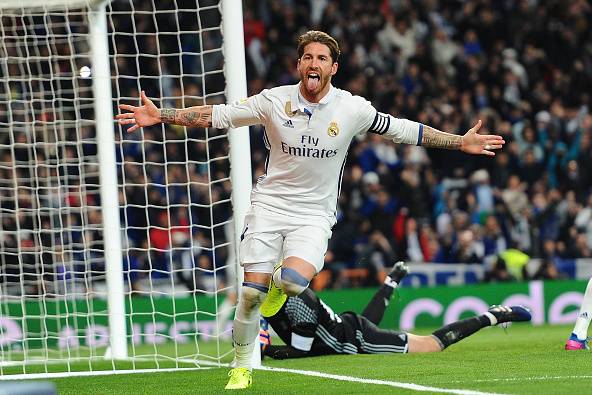 Real Madrid vs Getafe saw Los Blancos extend their lead on the top of La Liga to four points following a 1-0 win – Captain Sergio Ramos’ penalty made the difference as Real laboured to get maximum points – With five games left to play, Zidane’s men are now in a comfortable position to clinch the title Real Madrid vs Getafe ended in a 1-0 win for Los Blancos as they move four points clear of Barcelona on La Liga table.

It took a 79th-minute penalty from Sergio Ramos to make the difference in the match at the Alfredo Di Stefano Stadium. The entire first half was dominated by the visitors as Thibaut Courtois had to make three stunning saves to keep his side

The Belgian shot-stopper made huge saves from Jaime Mata on two occasions and Allan Nyom. Luka Modric had Madrid’s best chance all night as his right-foot shot took a slight deflection on its way into the net. Zinedine Zidane then made three changes in the second half, bringing on Marco Asensio, Rodrygo and Federico Valverde for Vinicius Junior, Isco and Modric

The top scoring defenders in #LaLigaSantander…

⚽️🔥 @SergioRamos is in a league of his own! pic.twitter.com/Bb90lgHxVT

Real Madrid vs Getafe: Ramos scores penalty as Los Blancos win 1-0. Photo Credit: Getty Images Source: Getty Images And Real’s attack had more bite on the night with several chances created but the finishing in front of goal was poor. Then in the 78th minute, Mathias Olivera from conceded a penalty for tripping Daniel Carvajal from behind inside the 18-yard box. Ramos stepped up and made no mistake with the spot-kick as the Galacticos took the lead which eventually became the goal that separated both sides as it ended 1-0

Meanwhile, Zinedine Zidane has made a statement about quitting his coaching career sooner than expected after claiming he is worn out as manager of Real Madrid. The 48-year-old is currently on his second spell as Los Blancos boss after returning to the club in March 2019. Since his return at the Santiago Bernabeu, Zidane’s men are presently leading La Liga table with two points above their fiercest rivals Barcelona. Legit.ng also reported that Lucas Vazquez has aroused the interest of Premier League side Tottenham for a possible £15million move from Real Madrid in the summer