Nikon D800 and Canon EOS 5D Mark III revealed! Who is the winner?

There is an ongoing, raging battle between Canon and Nikon, and it has reached  a serious hotspot. All the pros will be sharpening their eyes and ears, in eager anticipation to the two full frame pro DSLRs that are being released right now! Ladies and Gentlemen, its hotting up in here, please put your hands together for today’s marvellous competitors!!!!!!!!!

(This is an update posted after the original posting: Nikon have upped the price of the D800 by £200 claiming there was a ”pricing mistake” or ” Local Internal Systems Error” as they put it. Nikon refused to explain more details, such as why it took over a month to spot this ”error”. This 36.6MP camera currently costs £2,599, still a good £400 less than the 5D Mark III).

D800: The specifications… What is Canon up against? 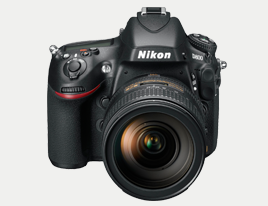 This camera was designed to replace the ageing D700, but the latter will still be on sale.  It features a monstrous 36.6MP CMOS full frame sensor, as opposed to the D700s 12.1 MP one. It also shows  improvements with its 51 AF points rated to -2EV, in comparison to its predecessor’s 51 AF points rated to -1EV. Its ISO range is 100-6400, extendable up to 25,600 and down to 50. Another major improvement is the availability of full HD video, that the D700 lacked.The Nikon D800 boasts Nikon’s EXPEED 3 image processing engine, and Nikon say it delivers smooth detail and abundant tone throughout its range, even up to pure white.

Nikon promises a smooth startup of about 0.12 seconds, and a shutter lag of 0.042 seconds. It has a continuous shooting ability of 4fps, with up to 6fps at DX-Format crop.

The Canon EOS 5D Mark III has been long awaited. The Nikon D800 was announced, then in a matter of a few weeks, Canon retaliates with this full frame contender!

The Mark II will remain on sale, but how long remains to be seen. It has a 22.3 MP sensor as opposed to the Mark II’s 21MP. It also features the new DIGIC 5+ processor which boasts faster shooting, and lower noise at higher ISOs. It has continous shooting of 6 fps, and its 61 AF point system replaces the older 9+6 AF one.

The ISO sensitivity is from ISO100-25,600, extendable down to ISO50, and up to ISO 102,400. The frame allows approx. 100% coverage, and, of course the Mark III has full HD video. There is now a dedicated movie button, and there is a dedicated headphone socket, and the camera is now capable of improved HDR (high dynamic range).

The Canon EOS 5D Mark III has a dust and moisture seal and a 3.2 inch Clear View II LCD to reduce reflections. It also has  dual CF (compact flash) and SD (Secure Digital) card slots and the shutter has been successfully tested to 150,000 cycles, and this should satisfy all but the most vigorous pros.

So, which is THE ONE?

While Nikon have 36.3 MP, 14MP more, in their monster, this is not necessarily better because it can cause more noise, but on the other hand, Nikon have always been good at keeping the volume (!) down, and the lower res camera produces smaller files. So, it will be interesting to see the results. Price wise, Nikon snatches it hands down, with the D800 costing £400 less (2,999.99 vs 2,599.99).

Both have HD video, but the D800 can shoot slow-motion and has variable frame sizes and depth of field effects, so, on paper at least, the Nikon D800 seems to be in the lead for video.

But who is the Champion!!??

Soon, more information will be available online, and lots of reviews will sprout up, as well as comparisons.

How to Photograph Food – Tips to Get Good Foody Photos!