“They say words confer a means to meaning and for those who care to listen,the enunciation of truth. And the truth is, there is something seriously wrong with this country”. But first…
Drum roll, enter the year 2011 when President Goodluck Jonathan was elected he promised to enact reforms that would transform the lives of millions of farmers who live on less than $2 a day, despite being situated on safe to say the most fertile land on the continent. Enter 2013, two years into President Goodluck Jonathan’s administration and these reforms remain mostly pipe dreams.
The Nigerian economy still rely largely on oil and if i must add, that’s one very big and delicate egg in a small and shaky basket. Yet agriculture is still the largest contributor to the GDP of the country by about 40% or so.
Now the problem. 170 million people to feed and more coming from God by the second, Africa’s largest population is standing on the brink. Reports and estimations say Nigeria may go into food shortage by 2023. If you think that’s far away remember 2004 was 10 years ago. Now add the birthrate, compare that to the elderly population and run a quick count of how many of these people will pass on between now and 2023. Its safe to say we are looking at 200-230 million Nigerians to feed. Then the question. Will oil take care of us all then?
Now the truth. Even if miraculously,the government improves over the years would we drink this crude oil we continue to rely on? Lets reminisce on the 60’s when Nigeria was the largest exporter of groundnut in the world and controlled 27% of the world’s palm oil trade. If you don’t grasp what that means please permit me to put it in context. If you were a groundnut farmer then,you were set for life! 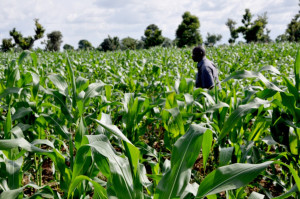 Now the contrast. Nigeria is the world’s second largest importer of rice,that’s not putting into consideration to amount of that smuggled. We are also the largest importer of U.S wheat while most of our land lies fallow. The details are depressing and the numbers involved are even more heart wrenching.
Quite a few have been done to inspire growth in the sector but more need to be done. Quite a lot has been promised also but hungry bellies and crashing economies don’t respond to promises. Its high time the country looks into farming for growth of the economy also for the employment opportunities. Acres of virgin land that would do a lot of good to secure the future of the country lie in wait. Plus the almost infinite amount of human resources its high time we get serious and start tilling.
Groundnut, rice, beans, wheat, sorghum, cassava, cocoa lying around. If we don’t grow them soon we will start importing garri from the US(that’s if we’ve not started already).

10 Best And Trusted Commercial Banks In Nigeria – Your Money Is Safe, And You Get A Good Service