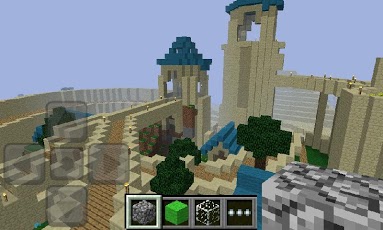 What is Minecraft? – Minecraft is a sandbox construction game that was created by Markus Persson. The gameplay involves creating and destroying blocks in a three-dimensional environment, and it has both single player and multiplayer gameplay.

Minecraft Pocket Edition is available for Android and iOS devices, and was released by Mojang AB, which is founded by Markus Persson. The game brings some of the Minecraft experience to a mobile device, while being available for free to try or as a paid version to experience the true joy of the game.

The controls. How are they?

There are arrow controls to the left of the screen that allow the player to control his/her avatar. The middle button allows the avatar to jump, however, it is programmed to climb blocks by simply moving forward into them. The right, left, forward, and backward arrows are self explanatory. The right-hand side of the screen can be touched to look around the three-dimensional environment. Double tapping on a block while the avatar holds the right tool will break a block, and with a simple touch, the avatar can place a block.

( Screenshot of the world showing the arrow controls to the left )

Building and destroying blocks are fine, however, moving around the world is not. The controls that allow the avatar to walk should have been redesigned in a circular touch screen pad. Instead of moving in a direction by pressing one of the arrows, the user should be able to touch any part of the circle to move in that direction. While playing the game, it will be tough to constantly move around while using the device’s touch screen. An external controller (bluetooth) might be a good alternative to replace the game’s horrible touch screen ‘walking/moving’ controls.

It’s basically Minecraft. Build, destroy, and explore. The possibilities are endless – sort of. Every time a gamer loads a game, the world changes. Therefore, there are low chances of getting bored right from the start of the game.

The player can choose between two game modes – creative mode, and survival mode. Creative mode gives the user access to unlimited resources and the ability to fly. As for survival mode, the user has a health bar, there will be mobs, and he/she will be required to gather his/her own resources.

What are the differences between the free and paid applications?