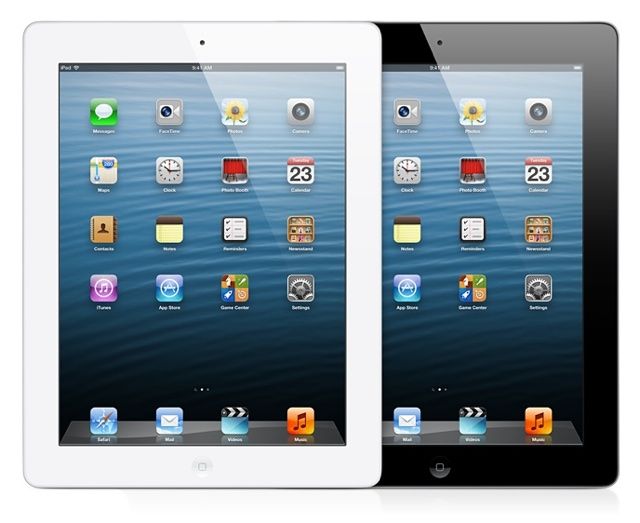 The iPad 4 is Apple’s latest generation tablet that was released in November, 2012. The tablet is available in two models – a Wi-Fi only model, and a Wi-Fi and cellular model. The cellular model of the tablet supports micro-SIM cards, and is capable of taking advantage of 4G LTE.

The iPad 4 is thin, sleek, and has an aluminium unibody – similar to the last gen iPad. The tablet has 241.2 x 185.7 x 9.4 mm dimensions, and is available in either black, or white. The bottom of the tablet has the lightning connector port – something new that differentiates the iPad 4 from its brothers.

( The photo above shows the black and white iPad 4 tablets )

The tablet sports a 9.7-inch Retina display with a screen resolution of 1536 x 2048 pixels, and a pixel density of approximately 264 ppi. In addition to the above, the tablet supports multi-touch, features scratch resistant glass, and oleophobic coating. 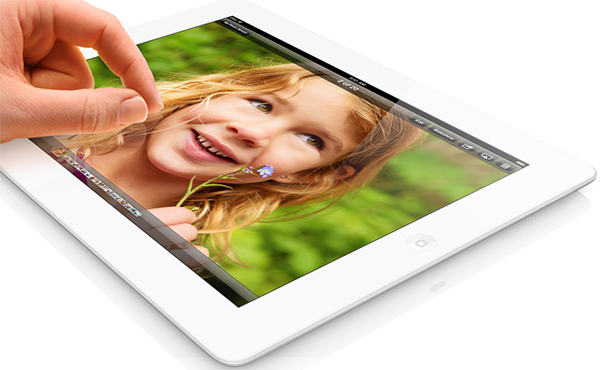 There is no doubt that the iPad 4 is the perfect tablet for watching movies, and playing mobile operating system games. Even on the lowest screen brightness settings, the tablet lights up the room, however, it’s not as bright on the level that will hurt the user’s eyes.

The iPad 4 takes advantage of the new Apple A6X chip, which delivers twice the performance of the Apple A5X chip that was used in the iPad 3. The tablet’s dual-core 1.4 GHz processor has the ability to run intense iOS applications with little to no lag, while its PowerVR SGX554MP4 (quad-core graphics) graphics processing unit does not fail in delivering the best performance when compared to any iPad tablet.

There is no lag while playing most graphic intense games such as Need for Speed Most Wanted, Real Racing 3, Infinity Blade, and Arcane Legends. The only game that had minor hiccups was Horn, however, the game is still playable. On another note, the tablet might start to respond slowly if its internal storage space is full or almost filled up.

( Picture showing a racing game being played on the iPad 4 )

The iPad 4 has two cameras – a 5 megapixel rear-facing shooter with autofocus that has the ability to shoot 1080p video, and a 1.2 megapixel front-facing webcam with the ability to use FaceTime (over a Wi-Fi or cellular network), one of Apple’s mobile operating system’s features.

The iPad comes with iOS 6 out of the box. The tablet’s mobile operating system is upgradable to iOS 6.1.3, Apple’s latest version of iOS as of this date. Although the latest update aimed at fixing the passcode bug, it introduced a new bug that allows someone to access the iOS by bypassing the tablet’s lock screen (if enabled), however, that can simply be avoided by disabling the ‘voice dial’ feature.

The operating system’s touch gestures are simply amazing. It is easy to use, and nothing too difficult to remember. Transferring data from the iPad to a computer can be difficult for the first-time user, however, it’s something anyone can quickly learn after reading a tutorial or getting help.

There are thousands of applications specifically developed for the iPad. A good handful of the total amount of available applications are optimized for the tablet’s Retina display (which is a large number).

As for the Apple App Store, the marketplace still lacks ‘must have’ features, such as a wish list while browsing the store using an iOS device. There is not much of a reason for Apple to hold back on iPhone and iPad users with the wish list, while its already a feature that’s available for desktop users.

What is an iPad without good battery life? With a powerful A6X chip and a Retina display, one might assume the tablet’s battery life is poor, however, that’s wrong. According to Apple, the iPad 4 offers about 10 hours of battery life for watching media, playing games, reading or writing content, and doing almost anything (this has also been tested and confirmed).

The iPad 4 is a little bit on the pricy side, however, that is common for any product created by Apple. The 16 GB version of the Wi-Fi tablet is the cheapest iPad 4 available, and gets more expensive while its internal storage capacity climbs up the ladder.