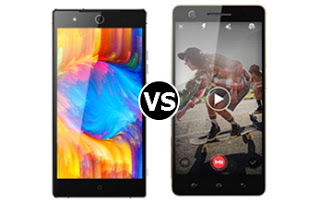 The Camon C9 is an upgrade of the insanely popular Tecno Camon C8 and it features some impressive specifications that make it significantly better than its predecessor. Infinix on the other hand, the infinix Hot S has some awesome specs that its predecessor never had.

After much anticipation for this two smartphones, they were finally launched. Tecno camon c9 was the first to be lauched by Tecno. As usual, it seems infinix was waiting for it rival and was also launched few days later.

One can easily say that these two Smartphones has already taken over the market currently but then the choice is really hard to make as these two phones seems to have similar features. Unless you can be able to analyze them wisely before the best can be picked out of this two and that is why we are here to give you the differences/similarities of this two devices.

Differences/Similarities between these two devices

INFINIX HOT S: The infinix hot s comes with a 5.2 inch display which makes it an average phone. Not too big, not too small. Although while we have different persons that would love a bigger phone, some individuals would still prefer a handy phone. The infinix hot s also features a 1080 x 1920 pixels resolution which keeps it in a full HD display. Infinix Hot S looks premium with curves on the edges, metal frame, and is available in rose gold, gold, black, silver, and blue.

TECNO CAMON C9: The tecno camon c9 on the this features a 5.5 inch display which makes it a little bit bigger than the infinix Hot S. Just like the Infinix hot S, it also comes with a 1080 x 1920 pixels resolution for a better viewing experience.

Well my take on this is that, as far as they have same pixel resolutions, the infinix hot s would be preferable to most people of the 5.2 inch size.

INFINX HOT S: When it comes to looking for one of the best camera phone to buy, the infinx hot s should be a choice as it comes with an awesome camera feature with good quality. On the back, you have a 13 megapixels camera with dual LED flash and on the front is an 8 megapixels wide-angle camera with a soft LED flash. For the selfie lovers, this would be good for you. Even though you are to use a selfie stick, i think it would make out a good choice because it feaures 8MP at the front of which most camera phones have at the back.

TECNO CAMON C9: This one also features a 13MP camera at the back and again 13MP at the front for taking selfies. But then, it features an iris scan camera which will make it easy for you to unlock your phone even without a password.

Well, it’s a matter of choice. You decide what you want.

Well, i think the infinix hot s comes in front here with its 1.5GHz octa-core processor which makes it a good one

INFINIX HOT S: The fingerprint feature is a wonderful feature for most big devices as not many devices has this feature but the infinix hot s comes with this which makes it the first phone from the infinix brand to feature such. With this fingerprint sensor, you easily unlock your phone upon detecting your fingers. This can make for a better security.

TECNO CAMON C9: You should know that the tecno camon c9 does not come with such feature.

Every other features are similar in these two devices. For now these are the only differences in them. It’s quite obvious that the infinix brand has something more to offer here. Not because i’m an infinix fan though but because of the differences i have seen in them.

Now talking about the prices, the tecno camon c9 is even a little bit expensive than the Infinix hot s.

So my friend, the choice is yours! 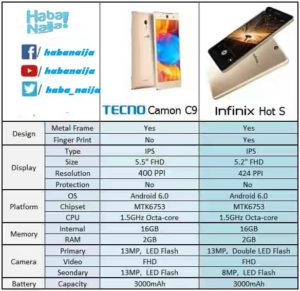 One thought on “Infinix Hot S Vs Tecno Camon C9 Comparison, Check It Out”