How to check the model and software version on BlackBerry 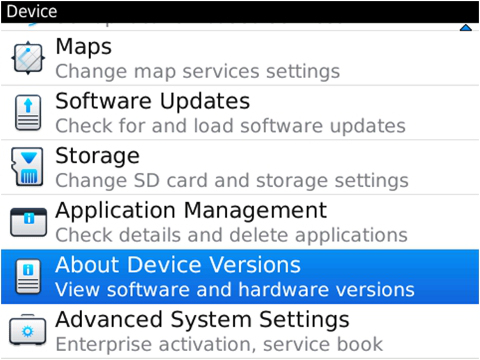 This tutorial teaches you how to check the model and software version of a BlackBerry smartphone. The steps involved might be different for each version of the BlackBerry mobile operating system. However, if it is different, the process might be similar with different wording.

How to check software version on a BlackBerry device running BlackBerry OS 6 or 7 :

The BlackBerry device should show what version of the BlackBerry OS it is running on and its model. For example (contents of what you might see are listed below) :

That tells us right away that the device is powered by BlackBerry OS 6. Its model is the BlackBerry Torch 9800 (3G and Wi-Fi). More details of the device will be listed below the contents that are listed above.

How to check software version on a BlackBerry device running BlackBerry OS 4.2 to 5 :

Note: it is also possible to view the software version of a BlackBerry device by connecting the device to a PC via USB and by using the BlackBerry desktop manager (if the device uses a password for security purposes, it might be required before accessing any of the device’s data from the computer).