How fair is the job application process in Nigeria – Most jobs have chosen candidates before the job is advertised. What do you think? 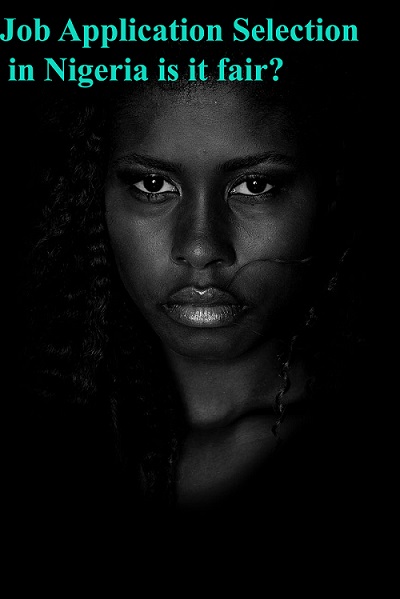 It is a fact that Nigeria is one of the richest nations in the world, at least in its abundance of natural resources. Indeed it was recorded that in the sixties, without  crude oil, the sub-saharan country was still striving well so much that its erstwhile colonial masters only had to leave due to international pressure that colonialism was becoming unpopular particularly by Britain who had strongly participated in the Second World War and a lead campaigner of the principle of freedom for all.

The discovery of crude oil, and the fortunes that came with it was a huge plus for the country. However, the sudden neglect of all other sources of revenue and huge focus on crude oil as its main source of revenue was the beginning of the country’s dilemma. coupled with a fall in the global oil price has triggered the country’s economic crisis.

Long leg required to get a job in Nigeria

There are limited job positions in the country and oftentimes those limited opportunities are already occupied by the popular saying ‘’people with long legs’’ meaning connected people. This has been a great issue in the Nigerian recruitment system. For example, in  the recently concluded NDLEA interview, people had to struggle to do interviews, climbing the window so as to have access to the interview while some are sitting at home peacefully expecting their appointment letter.

In every rumour, there’s an iota of truth. There was an appointment letter that went viral, when Federal road safety applicants were still undergoing interview. Although it was declared void by the parastatal,  it indicates some lapses in the system.

Often times, thousands of people are invited for an interview, while only a few hundred were needed. These few needed for the job comes with a recommendation from a top government official. According to a friend who went for an interview, ‘’ He was asked who brought you here” Ignorantly he said no one, he was then asked to stay in a separate place. He observed that when others were asked the same question, most of them brought out a letter or mentioned the name of a top government official. That was the end of that job for him. This sounds funny but true.

Another great problem affecting the number of job availability in Nigeria is the issue of Job buying. Some believed fulfilling job requirements can be a stressful exercise.  i.e job application, exams, interviews e.t.c and like the famous adage, ‘’ Money enhances the propagation of the gospel’’ Once the money is available they pay and buy the job.

Recently a friend wrote an exam in a well known parastater. She wasn’t called for an interview after the exam. She discussed with the staff of the organisation that she answered the questions correctly because they are cheap questions. He replied by saying ‘’It’s not all about answering the questions correctly, it’s about the people you know’’ At that moment she kept quiet and let it go.

Another important aspect to note about job recruitment is the hurdles people go through to fulfil the job requirement process for the job that has been set aside for a  few people with little space left for others. In past years, some died in the process of trying to do an interview. Often times, some government officials lobby for jobs for their families, which made the position basically not by merit but by the people you know. Having said all this, there are still some organisations that are more concerned about what you can offer, your skills, merit,  etc. However they are few.

To reduce these problems policies must be put in place to checkmate and combat the menace. Independent bodies must be set up with policies and fairness to combat the issues. For a country to  work effectively, peace, justice and a strong institution is needed to combat injustice in all sectors.

The economy should be diversified. Nigeria has left it’s inheritance and the major reason for its economic growth in the 60s. Agricultural sector should be re visited. Agriculture was our pride, the discovery of oil made us neglect that sector. However, oil can no longer sustain our economy because the world is gradually changing with the development of new technologies and initiative i.e Shale oil among others, there’s a need to revisit agriculture.

Be an entrepreneur create your own job

There’s also a need for entrepreneurship development in Nigeria. Nigeria’s high population growth rate can’t guarantee a job for every youth. For instance,  two graduates of my school came begging one of our lecturers for a job. He told both of them to go home to think over what they love doing best and come with a report/proposal.

The first guy said he loves pets i.e dogs while the other one said he loves farming. As generous as the man could be he gave both of them capital to start up a business. The first guy invested in (ugwu) vegetable plantation. The other one in dog breeding,  within a year these guys are cashing out and they do not bother looking for a job anymore.

Have you experienced any of the issues discussed in this article?   Please comment below.

13 thought on “How fair is the job application process in Nigeria – Most jobs have chosen candidates before the job is advertised. What do you think?”