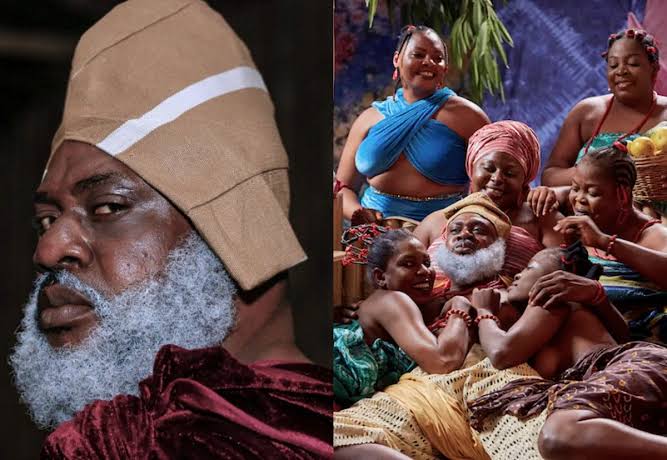 History dramas are relics that movie directors can’t bring to life in modern times. However, Biyi Bandele’s Elesin Oba: The King’s Horseman is an exception. In the future, it will be a cinema classic for African audiences.

We’ll review the new Nollywood film currently in cinemas and available on Netflix.

Please take caution! The following review contains spoilers. To avoid spoilers, watch the movie first, then read this review. However, if it doesn’t bother you, continue reading.

About Elesin Oba – The King’s Horseman

This Yoruba historical drama was directed by Nigerian novelist and playwright Biyi Bandele, who sadly passed away in August 2022. However, Ebonylife TV and Netflix produced and distributed the film to the general public.

Odunlade Adekola plays the lead role in the movie, which is based on a true story that occurs in Yorubaland during British colonization and also features;

The Synopsis Of Elesin Oba – The King’s Horseman

According to tradition, after the Oba passes on, Elesin (his horseman) prepares to sacrifice his life 30 days later to escort the Oba’s spirit to the afterlife.

Although on the day Elesin is meant to sacrifice his life, he sees a beautiful woman in the market who he decides to marry and sleep with before leaving the world.

Moments later, before the Elesin can perform the ritual, he’s arrested by British colonial officers and fails his assignment to escort the King’s spirit into the afterlife. Thus, Elesin disappoints and causes calamity for the King’s people.

The Top 4 Actors’ In Elesin Oba – The King’s Horseman

Odunlade Adekola played the lead role in Elesin Oba. His character is an individual who toiled for the late King and has to sacrifice his life to guide the King to the afterlife.

As the lead actor, Odunlade Adekola pulled off a brilliant performance by conveying his character’s emotions. His character (Elesin) is happy to be the escort for the late King. Nevertheless, due to his lust for a beautiful woman, Elesin’s mission goes downhill, and he falls into depression.

Coupling the brilliance of the crew and Odunlade’s award-winning acting skills, you’ll think it’s someone else acting the role, not Odunlade Adekola.

Shaffy Bello does a splendid performance anytime she’s on screen. However, Shaffy’s performance in Elesin Oba outshines her previous successes.

Shaffy plays the character Iyaloja, who’s a middle-aged sophisticated Yoruba woman. Yes, she spoke Yoruba every time she was on-screen, which is rare for Shaffy Bello. Despite this, she was superb in the role.

Omowunmi Dada is a Nigerian actress famous for playing the character of Folake on M-Net’s Jemeji TV series. She plays the role of the bride of Elesin.

In the cinema version, Omowunmi (the bride) didn’t have dialogue, so it’ll be challenging to rate her character. Nonetheless, her supporting physical role was top-notch and good to watch.

Deyemi Okanlawon is our last outstanding actor who played the role of Olunde, the son of Elesin. Deyemi’s character (Olunde) is conflicted between putting a stop to the ritual in his hometown and continuing his Doctorate studies abroad.

Deyemi puts on a great show as the worrying son, but his suit looks too sharp for colonial times.

● The movie is set in pre-colonial Nigeria.
● Every scene had meaning and was brought to life by the actors.
● The crew did a good job making the setting as accurate as possible.
● The use of proverbs was great, based on the setting.

What We Didn’t Like About The Movie: Elesin Oba

● The story is linear, like one-way traffic, and there’s no climax.
● The story is slow-paced, and some scenes are repetitive.
● The characters mostly spoke in proverbs, so modern people will find it hard to follow.
● Some outfits needed to be more accurate to colonial times.

Who Should See The Movie: Elesin Oba

Although if you love Terra culture plays, then you’ve probably seen the play (Death and the King’s Horseman) In addition, if you’re a fan of Wole Soyinka himself and his work, you know, his books, or his plays, then you’ll enjoy this movie.

Elesin was quite average and lacked personality. It should have a modern or contemporary feel. Nonetheless, we doubt Wole Soyinka will permit them to revise his work.

Consequently, it has stayed the same for many years and will probably appeal to only a few people. From what we can tell, this film is based on a play that’s typically only seen on the stage.

Good luck to those involved. Regardless, this movie will most likely still receive many nominations come award season.

Why Does Elesin Stop Himself From Dying?

When Elesin fails to commit suicide, he blames Pilkings (who arrests him as he attempts suicide), the gods, and his bride, and admits he loved life too much.