Amnesty in the Niger-Delta: A Waste In Progress or A Working Progress

My teacher in primary school used to echo every morning before the first lesson, “anything worth doing is worth doing well”. It did not mean much to me back then, all that concerned me was let me not find fault in his eyes today. Then yesterday it made a whole new meaning to me like when a cop gets an epiphany in those crime/investigation movies and then I felt i should let whoever cares to listen see my point of view.
Its no news that the Federal Govt is currently funding some 30,000 characters under the tag of ex-militants with tax payer money to train and rehabilitate these right now rather fortunate humans. Now if that last sentence did not mean anything to you please stop reading now and go bother yourself with less boring stuff, if not continue reading as i attempt to entice your intuition. I came across a saying once,that only two things are certain, death and taxes. Means if you are not dead right now,you are currently paying some from of tax. Now if the idea of this paragraph eludes you then wonder no more, for you are currently paying 30,000 people for being criminals.
First ask me, is there an excuse for crime? My answer is yes and no. If you want m to explain that you have to meet me in person otherwise see the 2005 movie, V for Vendetta and you will understand why. The idea of forming a movement for the good of the Niger-Delta was a great one. But then it went out of control for reasons the average Nigerian as myself and you only read in the National dailies. Those who know why are out there somewhere in Nigeria. 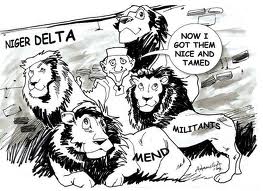 The amnesty program was also a great idea if we look at it from the angle of mopping 30,000 criminals off the Niger delta. But this idea also made criminal-ism profitable. Now what stops me and 29,999 other unemployed,restive,frustrated and tired Niger Deltans from starting a new insurgence? If there is anything the amnesty program has taught many is that crime pays…in Nigeria.
Lets make no mistakes, there is no modern day society that is crime free. But a society where crime becomes non-profitable is a better possibility. The amnesty program would have been a better idea if the plan was to remove the reason for crime and not remove the criminals and leave a perfect breeding ground for new criminals. As i speak to you, there are still a Niger delta youths who wont eat until they have spent hours calling one Honorable “Ose”(Urhobo for father). Numbers do not lie and if the government think that the Niger delta problem ends with spoon feeding 30,000 only then I am sorry we all ended up in the wrong country. Those young men are just in wait to be handed weapons for the coming 2015 elections in my opinion. After the elections they are back to square 1 and then its 2006 all over again like the world is having flash back in real time 3D. 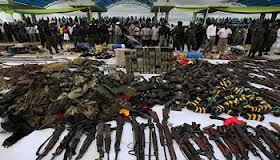 The Niger delta amnesty program may appear to have been a success on small scale but until core issues that matter are addressed and not being “looked into by the committee” then we are underway to a bigger fiasco. We already have Boko Haram and after we serve up another amnesty package to them i wonder what our brothers from the east will come up with.