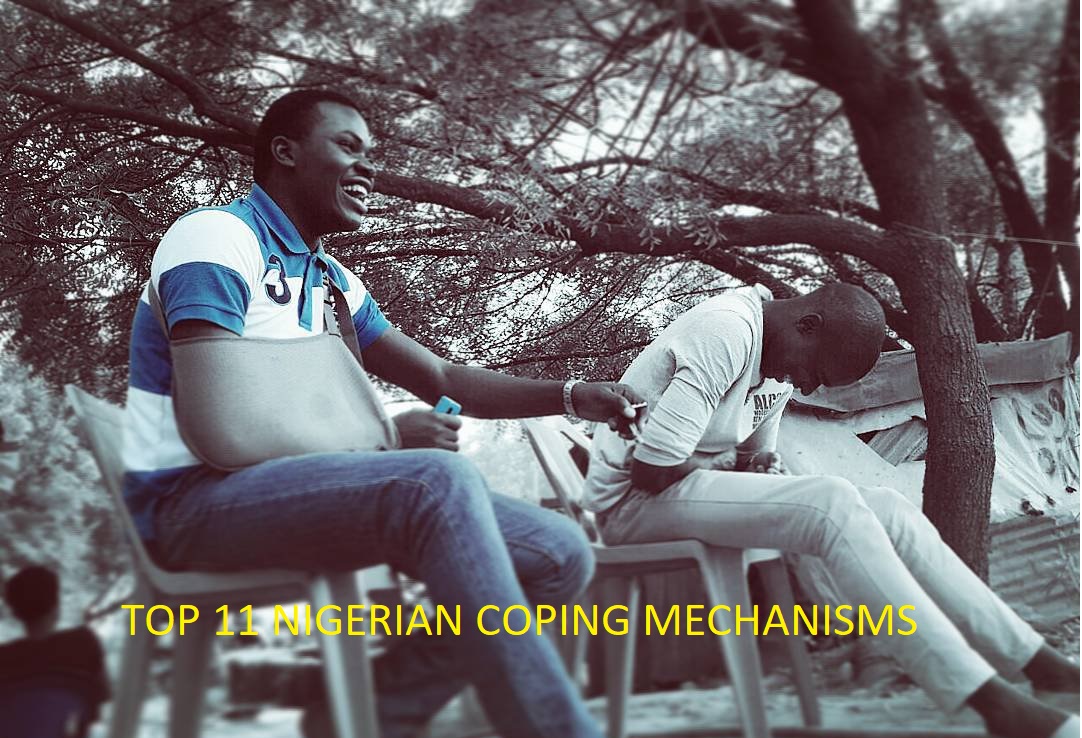 An adult exerting himself at any endeavour, no matter how useless, will have a range of issues to deal with. These issues range from the ordinary; like chapped lips in harmattan — to the complex; like getting sexual advances from your line manager. The tasks we carry out at work are the easy part. The parts we can’t physically see; the emotional/psychological aspect – is the harder part.

How do Nigerian adults people cope with varying issues and emotions they face daily? Happiness, bad grades, progress, diseases, accidents, demotion, stagnation, profound sadness, acute depression and many more. This is a collation of categorized observations and responses to a poll taken on Nigerians. This list is not going to discuss the morality or the legality of these actions. A bad excuse is still an excuse; in the same vein a terrible coping mechanism is STILL a coping mechanism.

In no particular order, here are the most popular coping mechanisms favoured by Nigerians:


For those who indulge, ‘why do you drink’ is a difficult question to answer. Alcohol is many things to many people. Alcohol does not let you forget your issues as some would have you believe – but it puts things into perspective. Alcohol is proven to be a tongue-loosener. It, for a while at least, embiggens the feeble, emboldens the timid, and gives temporary voice to the generally mute. A common line is “using alcohol to drown your sorrows”. Alcohol does not erase your problems, but like other coping mechanisms on this list, it temporarily put things into perspective for you and that’s all you need sometimes.

: “We move” is a contemporary pop phrase used by young-ish Nigerians to mentally shrug off disappointments and negative outcomes. This usually involves, but is not limited to rejection emails, job loss, acute illness, being badly singed by a love affair taking a wrong turn and pure old ill luck in affairs. The downside to the WeMove philosophy is that after a while of unprocessed issues, you trudge around with emotional baggage which overwhelms you. You move, yes, but sort yourself and process your feelings.


Blood is thicker than water has been said to mean “the blood of the covenant is thicker than the water of the womb”. In essence, the saying insinuates that “loyalty is thicker than family ties”. We keep learning new things on Obasanjo’s internet. When the chips are down, many still retain the full backing of both their closest family members and innermost circle of friends. Books and awards are dedicated to them, they are thanked for support after recuperating from an illness because they are there through the stratospheric highs and more importantly, the abysmal lows.

: can be many things to many people depending on whose definition you seek. Some believe there is a karmic boomerang that invariably hits you when you betray the trust of a sexual partner or a spouse by playing away matches. To some, sex is a just a mechanical exercise devoid of any emotional attachment. People like this who often use it as a coping mechanism. It’s just a rigorous exertion that takes the mind off immediate issues and makes life that much tolerable.


While some are used to dull the senses, some are to heighten them. Some numb the muscles and some slow you down to the point of sleep – and sometimes, an overdose leads to death. These drugs are done through oral, nasal and intravenous administration for a range of purposes and effects. Left unchecked, drug users run a high risk of addiction and the road back to normalcy gets thorny and is rarely successfully journeyed.

: In “The Subtle Art of Not Giving a Fuck,” Mark Manson wrote a great passage about the contemporary human. He wrote that “…our society today, through the wonders of consumer culture and hey-look-my-life-is-cooler-than-yours social media, has bred a whole generation of people who believe that having these negative experiences – anxiety, fear, guilt etc. is totally not okay.”

But it is. These emotions we would rather not have are part of life. Not acknowledging them does not help in the long run. Sometimes, it’s best to momentarily abandon everything, process the emotions, examine the facts, form a strategy and cry a good, snotty cry before moving on. This is a cheap but effective coping mechanism.

: Would you pay $100/hr (N36,000) to talk to a psychiatrist about unprocessed events buried in the deepest recess of your mind? This provides closure, catharsis and remedial discourse against sleeplessness, latent anger and the likes. Recently, a Nigerian soldier deliberately opened fire on one of his colleagues, killing four and wounding three. True to fashion, the kneejerk reaction of the internet was to come up with a diagnosis (PTSD), a prognosis and a treatment.

Our idea of therapy has been shaped by the Hollywood portrayal where patients’ backs are on the couch, facing the ceiling, revealing memories you didn’t know you had, forgiving your parents/children and finally processing your feelings. This is one of the better but more expensive coping mechanisms.


Sherlock Holmes said, “It is a capital mistake to theorize before one has data. Insensibly, one begins to twist facts to suit theories, instead of theories to suit facts.” As a proponent of evolution, the conclusion is already there. You just twist the details to arrive at those conclusions. If you are a proponent of creationism, just how far can your questions go before you get to the precipice of insanity: what was there before the beginning?

As it were, agnostics and atheists still turn heads in Nigeria because the majority believe in the Christian/Muslim concept of a God; which is a celestial body being the creator and general overseer of all the worlds. So, people hold out hope by praying to this Supreme Being. Sometimes, things fall into place and prayers are deemed answered. When said prayers aren’t answered, God knows best. Have faith.


People hang on to the hope of an outcome that will better their lot by gambling. Gambling operates on the mathematical principle of probability. “As long as there’s life, there is hope” is the undeclared motto of gamblers. People who gamble right do it recreationally to see just how good they are at forecasting outcomes. Degenerate gamblers run the risk of destructive addiction. Gambling is one of the more addictive escapist coping mechanisms. Left unchecked, it has the potential to destroy lives. Wear spikes of restraint if you choose to embark on the slippery slope that is betting.


are clinically recommended for people who feel lonely, anxious, stressed, agoraphobic, desolate and borderline suicidal because of certain circumstances. John Wick went on a rampage and killed three million people because his dog was killed. This was because the dog was more than just an animal to him. He depended on the dog for companionship. A key component of using pets as emotional supports is based on the premise that being responsible for the life and care of a living thing that you can bond with who depends on you not to die is a good thing.

: That’s a trope done to death by “motivational speakers” in Nigeria. It’s a simple reality: shit happens. Things go wrong. We lose confidence and sometimes motivation. Chuck Close said “Inspiration is for amateurs. The rest of us just show up and get to work.” Similarly, Mark Mason wrote that “Action isn’t just the effect of motivation, it’s also the cause of it.”

In essence, all the motivational Youtube videos and all the aspire to acquire texts will be a corpulent waste of time if you don’t eventually carry body to do stuff.